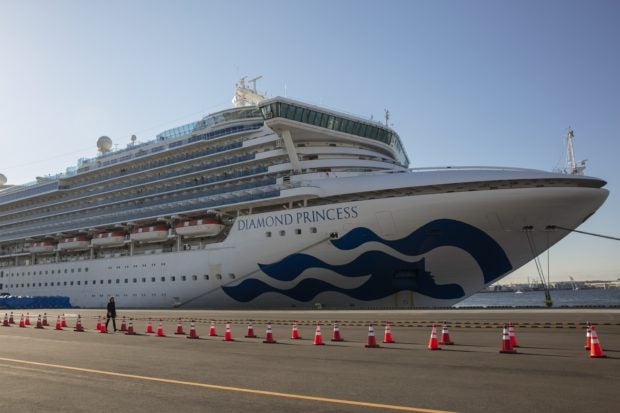 Presidential spokesperson Salvador Panelo said the Filipinos to be repatriated are expected to arrive early next week via Clark International Airport.

“The Palace confirms that the Inter-Agency Task Force on Emerging Infectious Diseases (IATF) has approved the repatriation plan in favor of Filipinos aboard the M/V Diamond Princess, docked in Yokohama, Japan, earlier today, February 21, at the Department of Health – Central Office,” Panelo said in a statement.

“The IATF warrants that the prospective repatriates should have completed a fourteen (14)-day quarantine period in Japan and have secured clearance certificates from the latter’s Ministry of Health before their embarkation for the said travel,” Panelo added.

Foreign Affairs Secretary Teodoro Locsin Jr. earlier ordered the immediate repatriation of Filipinos aboard the cruise ship that has been put under quarantine due to the novel coronavirus disease or COVID-19.

Repatriated Filipinos who will manifest symptoms should be brought to the nearest hospital, Panelo noted. Meanwhile, asymptomatic repatriates shall be quarantined at the Athlete’s Village in New Clark City to undergo another 14-day quarantine.

“The Office of the President also assures the public that all precautionary measures and safety protocols are in place for the seamless repatriation of our countrymen from Japan,” Panelo said.

Panelo likewise assured that the Departments of Health (DOH), Foreign Affairs (DFA), and Interior and Local Government (DILG), as well as the Overseas Workers Welfare Administration (OWWA) and Bureau of Immigration (BI), are preparing to execute the repatriation plan and give assistance to repatriates.

The government had earlier repatriated 30 Filipinos from the Chinese province of Hubei, which capital city Wuhan is the epicenter of the COVID-19 outbreak.